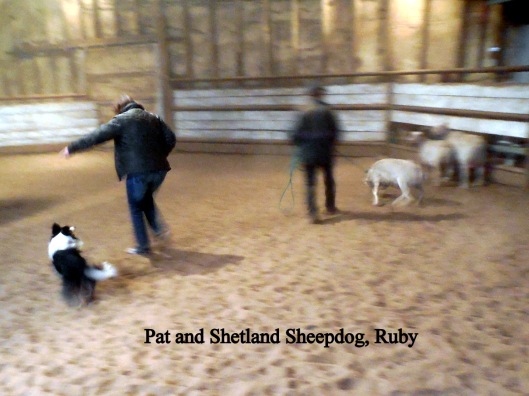 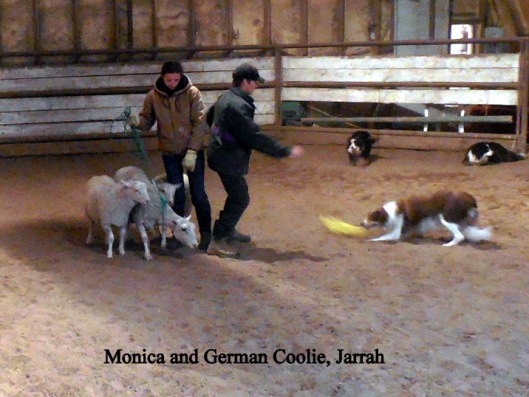 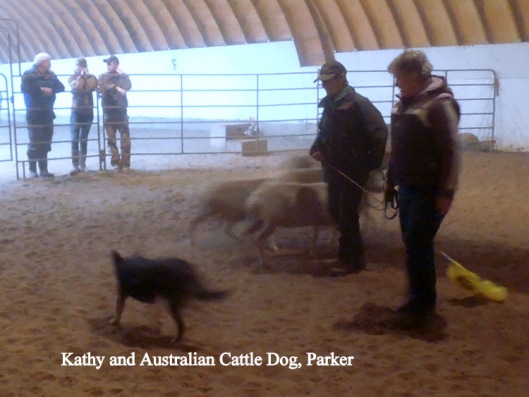 These are the remainder of the photos taken during the herding clinic. Please pardon the poor quality. The dogs were very fast and the dust stirred up by panicking sheep made photography a challenge.

These are some of the photos taken during the herding clinic. Please pardon the poor quality. The dogs were very fast and the dust stirred up by panicking sheep made photography a challenge. The remainder of the photos will be posted tomorrow. 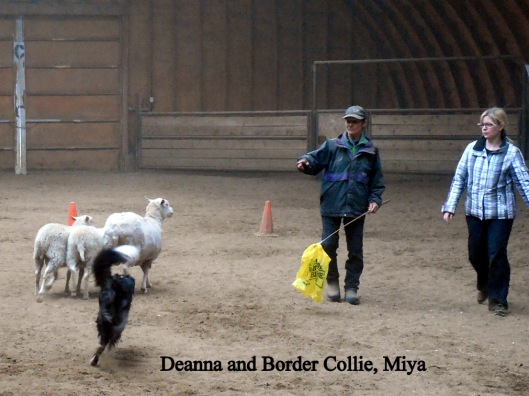 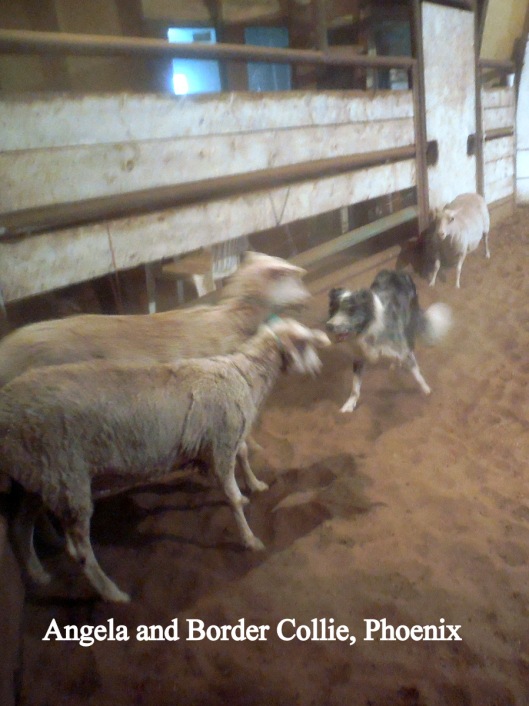 The Central Alberta Herding Clinic was a great success.

Today, I’m collecting photos and will be posting them here over the next few days. And to take a breather. Saturday and Sunday were monster days of keeping track of everyone, and finding one lost participant. All in all, everyone and their dog left with a huge respect for the herding breeds, an appreciation for the herding dog trainers, and a smile from seeing their dog’s performance, even if Fido’s instincts fell a bit short of trial quality.

In spite of the rain, everyone who registered attended (except one due to illness). We owe a huge thank you to W Five Farms Dana and Herbert for letting us use their horse arena. Kathy and Ralph Playdon provided a table full of goodies as well as the most delicious burgers and smokies.

I was totally impressed with the dogs, including the ones that hadn’t seen sheep before, but exhibited strong herding instincts. Those Border Collies, German Coolie, Australian Kelpie, Blue Healer – a m a z i n g!!!

Our Sheltie group had to admit the Sheltie can herd, but it will take more dedication and perseverance. The Shelties entered the ring with some pretty snarly sheep but showed no fear, especially wee Tux. Very impressive.

None of this would have been possible if it were not for Kathy Playdon’s willingness to fit us in her crazy busy schedule. Kathy gave one on one attention to each dog and its handler, providing feedback and instruction. And even when a few herders wanted to taste a bit of mutton, Kathy managed to keep smiling. Her calm and wise leadership is what made this event such a fun and educational event.

Yesterday, Sammy and I set off for Wetaskiwin and his open level obedience class. In the daylight, the driving conditions didn’t seem all that bad. With my favorite Timmy’s coffee and the radio playing the hits of the 70′ and 80’s, I put faith in my driving experience and good tires. By the time we arrived in Wetaskiwin things got scary. As my SUV slid through an intersection I wondered if I should consider over night accommodations. But at the class, Sammy and I had fun doing the jumps and dumbbell routines. I forgot about the worsening weather.

At 9:30 we headed back. I planned on taking Highway 2, a divided double lane route that would allow me to stay in the slow lane. I pulled out Elsie, my grumpy GPS and told her to point me toward home. She was silent most of t he way through Wetaskiwin except for a couple of terse commands which I obediently followed. Damn!

Too late I realized I was on highway 2A, a nasty winding two lane narrow old highway. In the dark, visibility was further hampered by blowing snow. I could barely determine my side of the road. You’d think there wouldn’t be much traffic. However, half of Alberta was slip sliding toward me. A few times I wanted to throw up. Once I arrived at Leduc, I thought I could breathe again. Nope!

I got back on Highway 2 but missed the exit to Highway 39. Should be no big deal. However, if you know this stretch of Highway 2 heading into Edmonton, you’d know it has a killer reputation – literally. I don’t know how many drivers I ticked off traveling 40 mph, but I was determined to get Sammy and me home in one piece.

As I backed into our garage, I felt so grateful for whatever gods and angels kept us safe. I opened the door to Sammy’s crate and beckoned him to come out. NGDW! He must have been aware of my fear for the past hour and half. I had to pull him out and show him we were home.

Oh, in case you were wondering how he did during his lessons? What can I say. He’s aces. Now, if he can remember his lessons at the Red Deer competition, I’ll be happy with a pass. However, I am experienced with being humbled by my loving companions at these events. Whatever. So long as we’re having fun.

Brightbank Finnsheep http://www.finnsheep.ca/ . Brightbank
Finnsheep is about 40 minute drive west of Edmonton, Alberta.
If weather becomes a concern, we may decide to use a nearby arena.

Fee:  $80 per dog, per day  Prior to April 15th, each participant will
need to confirm attendance by forwarding a $40 deposit toward the clinic
fee. There will be no refund if the participant chooses to cancel
participation. Final payment will be due upon arriving at the clinic. If
the clinic is cancelled, all deposits will be returned.

Snack food and refreshments will be provided to the participants at no
extra charge. Guests may be asked to pay a small fee (or donate).

– Your name and contact information (phone number)
– Name of your dog, breed, and age
– Any question you may have

*NOTE*:  I am volunteering to organize this event (for the love of the
herding breed and their handlers). 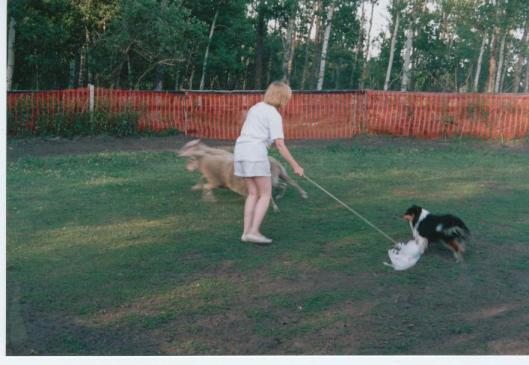 BROOKS, is an 18 month old Shetland Sheepdog who bolted from his new owners and vanished. A few days ago he was spotted west of Stony Plain, Alberta. He was heading west in the ditch of Highway 16A between RR 12 and RR 13.

What can you do? If you are in the area, please keep an eye out for this lovely and very scared Sheltie. As he is very timid, it is best to not pursue him unless you feel he needs immediate intervention. Please contact the owners or the following as soon as possible.

Please email Alberta Sheltie Rescue at:  albertasheltierescue@yahoo.ca Give them your phone number and they will return your call.

or Gordon De Boer at:

Are you a Reiki practitioner? If so, please send Reiki energy to Brooks. 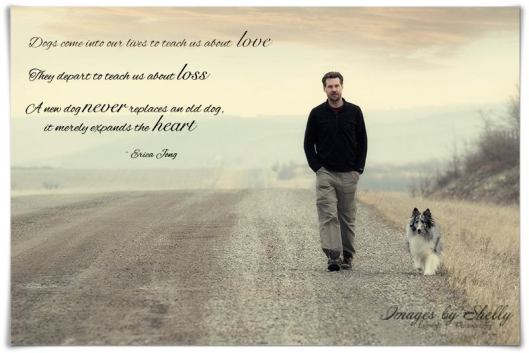 Source: 20 Things All Dog Owners Must Never Forget. The Last One Brought Me To Tears…

Any dog lover will tell stories on how devoted their dog is. Shetland Sheepdogs are famous for their loyalty. Actually, I don’t know of any dog breed that lacks this characteristic if they are treated with respect and affection.

What is shocking is that when the dog’s behavior shifts momentarily more toward his/her’s natural instincts, the owners may feel disappointed, even act hostile toward their pet. They feel disrespected.

All too often I find that people have difficulty seeing the world through their dog’s eyes and heart. They place enormous expectations that this animal is there only to fill some need that the human world has failed to provide. It appears their demands are a one-way, my-way or the high-way, rather than an equal partnership.

A few days ago while at the off-leash park with Sammy and Jade, three men were calling their dog which was happily romping and running several yards away. They called and called. “Come, Fido. Let’s go. Come, Fido. Fido,  Fido, Fido. Get over here.” The calling continued and gradually became hostile. It would have been easy enough to walk up to Fido and put the leash on his collar. But no, that would appear they were not in control.

I felt like I should step in the offer a suggestion. However, their demeanor has shifted to aggression which sent my bravery skittering to the other side of the park. I felt sad for their dog and wondered if the dog continued to suffer abuse at home. (I’ve seen women be just as mean to their dog) 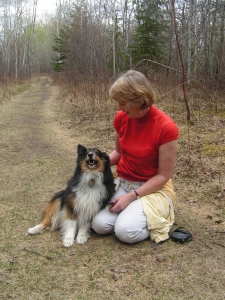 If the dog doesn’t hear you calling (which offer occurs at off-leash parks), don’t get angry. Scolding the dog will only reinforce the dog’s fear of you and not want to be near you. Instead, observe how your dog is having a great time, interacting and socializing with other dogs and people – a very important component in the dog’s life. Do some training at home. Bring a favorite treat. Once he/she knows a treat (even a small morsel) is offered, you’ll have less trouble getting Fido back to you. Be his best friend.

Sometimes I think we get hooked on the idea of making the dog suit our needs, to be more human like, or better than human. A dog is a dog. Each breed has special characteristic which may, nor may not, fit into your idea of a canine companion. That is why it’s so important to consider the breed ‘personality’ when getting a puppy.

If not, do yourself and your dog a favor. Deliver your dog to a shelter who will care for him/her. They will find a home that will offer love, respect, and patience.  They will be the dog’s best friend, forever. 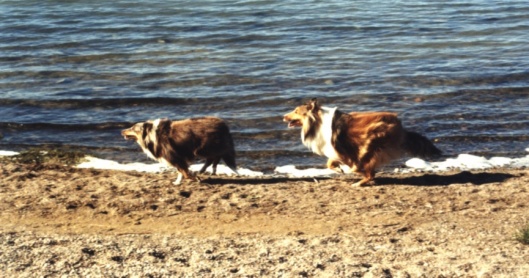 Scotty and Roo at Yellowknife

Chili has been helping Lina train for a big 3-mile race tomorrow – the Florida Cup on St. Pete Beach. The miles really…

Chili has been helping Lina train for a big 3-mile race tomorrow – the Florida Cup on St. Pete Beach. The miles really… 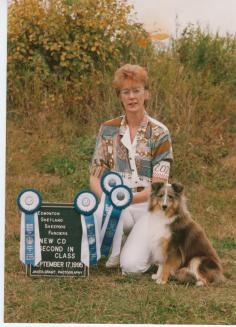 Scotty and Roo at Yellowknife 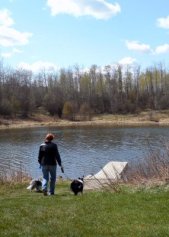 Judy, Sammy and Jade at Chickakoo